An excellent, full-featured super-automatic. While the tech isn’t cutting edge, it’s got everything you could want in a one-touch specialty coffee machine.
Recommended for: Ideal for single people or small households, and people new to the world of specialty coffee drinks. its short height makes it great for people with low counter to cabinet clearance.

DeLonghi ECAM 23460 Silver
$999.99
March 15, 2020 9:53 am
× Product prices and availability are accurate as of the date/time indicated and are subject to change. Any price and availability information displayed on Amazon.com (Amazon.in, Amazon.co.uk, Amazon.de, etc) at the time of purchase will apply to the purchase of this product.
9 new from $999.99
1 used from $529.99
Buy Now

An Overview of the DeLonghi ECAM 23460 S

Are you relatively new to the world of specialty coffee drinks, and looking for a machine that not only bridges the gap between your former “brewed by the pot” world and this one?

Do you want a machine that allows enough options to give you the custom coffee experience, without all the complexity, and without having to learn to become a professional barista?

Even better, one that does that without costing you an arm and a leg? The DeLonghi ECAM23460S may be the answer, and exactly the machine you’ve been looking for!

While it would be overselling it to call the machine cheap (any coffee machine that costs more than a thousand bucks definitely isn’t cheap), it can easily hold its own against other super-automatics that cost twice as much, giving you the best of both worlds.  A robust set of features for a fraction of the price.  What could be better?

Of course, to do that, this model does cut some corners, and we’ll cover its weaknesses in detail too, so you have all the information you need to see if this one is a good fit for your tastes, preferences, and lifestyle.  Even if you pick some other model though, we think you’ll agree, the DeLonghi 23460 is a great model and would make a fine addition to almost any home.

The first thing to mention here is that the DeLonghi ECAM23460S is fairly short as compared to many other super-automatics, with dimensions of 9.4”x13.4”x16.9”, and weighs 28.8 pounds.

As mentioned in the summary, this makes it ideal for people who live in apartments or houses where there’s very little clearance between the kitchen countertop and the lower edge of your cabinets.

The other dimensions are fairly typical of machines in this class, so you will have to have at least some counter space to work with if you mean to find it a good home.

It features classic, timeless European styling and an understated appearance, is manufactured in Italy and is finished with a lustrous, bluish-silver hue. While it won’t work in every home kitchen, it makes a handsome addition to most!

This is a big win, and a crucial part of our DeLonghi ECAM23460S review.  The unit comes with an impressively sized 1.8-liter (60.8 ounce) water tank.  Even better, it’s front-loading for easy access. In most machines, the only way you can get the water tank out to refill it is to physically turn the machine around.

Good thing, this model gives you the best of both worlds.  Not only will you not have to refill it very often, owing to its large size, but when you do have to refill, it’s easy to get to!

As with many De'Longhi super-automatics, this one comes with a filter built into the reservoir.  We’re of two conflicting opinions about that.

On the one hand, having the filter is nice. You can control water hardness, and as a result, have to descale your machine less often. On the other, it means that you’ve got to periodically buy more filters, which is an ongoing, recurring expense that adds to the total cost of your machine.

Some people do love the filters though, and we certainly can’t fault the company to catering to that segment of the market, so we didn’t deduct any points in our ranking for the inclusion.  It’s just that there are other ways to minimize descaling that don’t involve having to buy filters all the time.

The DeLonghi ECAM 23460 features a conical burr grinder with 13 grind settings.  While it’s true that you can find other machines on the market today that offer more grind settings, thirteen is more than enough to satisfy most users, and it gives you plenty of flexibility in terms of customizing the flavor of your drink.

Another thing we like about this unit is the generous size of the bean hopper, which holds an impressive 8.8 ounces of beans.  That size is above average, so we count it as another strong point of the design.

In addition to offering a good-sized bean hopper, the DeLonghi 23460 also features a one-scoop bypass doser for those occasions when you ran out of beans or just don’t feel like going through the whole process. Very handy!

We should note that this model, like most other super-automatics, doesn’t do well with oily beans. For best results, Medium Roast is recommended!

Pro Tip:  Other DeLonghi ECAM 23.460.S reviews sing the praises of the grinder as well, and with good reason.  Given that the industry average number of grind settings offered on super automatics is just six, this model gives you a tremendous amount of flexibility on that front!

Pro Tip:  Other Delonghi ECAM 23460 S reviews sing the praises of the grinder as well, and with good reason.  Given that the industry average number of grind settings offered on super automatics is just six, this model gives you a tremendous amount of flexibility on that front!

The DeLonghi ECAM23460s utilizes a double boiler system, which is common amongst the machines De'Longhi makes. That’s great, because it means you can simultaneously brew coffee and steam or froth milk, without having to wait for the boiler to adjust temperature as would be the case in a single boiler appliance.

We’ll talk further about the temperature of the machine’s output later, but it bears mentioning here that we were both pleased and impressed with the water temperature produced by this model!

The dual coffee spigot adjusts up or down as needed, and can accommodate cups up to 6” in height, which is perfect. It's the standard you see on machines like this. It’s not a huge feature, but it is a nice finishing touch.

If you need to use a cup or glass taller than 6”, you can probably fit one up to 6.5” tall under the spigot if you hold it at an angle. That, of course, means that you’ll need to stand in front of the machine holding the cup during the entire brewing process, which most people wouldn’t want to do.

The DeLonghi ECAM23460’s controls are surprisingly simple, featuring one dial at the center of the front control panel, and seven buttons surrounding it.  You order coffee by turning the center dial to the settings you want, choosing from:

Cappuccino has its own button, just below the control dial.

Of these, the only one you can program is the “My Coffee” option, which limits you to a single custom coffee creation. That’s no big deal if you’re the only person in your house who enjoys specialty coffee drinks, or if you live alone, but it may be a deal breaker if you have a large household with multiple coffee aficionados.

Note that you can make adjustments to the other options (changing the strength of the brew, adding milk, etc.), you just can’t save those changes, so you’ll have to reset them with each use.

A single “shot” of coffee can be set to as much as four ounces (the extra-long shot), and the silver compact ECAM 23.460.s allows you to brew up to two cups at once, which gives you a total brewing capacity of 8 ounces at a time.

Of course, if the machine had a proper frothing wand, you’d have precise control over this, but these three settings are enough for most people.

If you consider yourself to be a casual specialty coffee drinker, you will probably be satisfied with those options, but they’ll cramp your style if you’re a hardcore DIYer who wants maximum control over your finished product. In that regard, this has to be considered a design limitation.

One thing to draw special attention to here is the fact that while most super-automatics have the problem of brewing coffee that’s not quite hot enough for the American palate, the DeLonghi ECAM 23460s does not suffer from that limitation.

In test runs, even milk based drinks hit a cold cup at about 185 degrees (Fahrenheit), and that’s not bad at all!

One of the reasons for this is, of course, the fact that this model allows you to brew “regular coffee,” making it the ideal choice for someone who’s accustomed to drinking coffee by the pot, but also curious about the world of specialty coffee drinks, and wants to explore it, while maintaining the ability to enjoy a regular cup of Joe when the mood strikes.

All that to say that unlike a number of other one-touch espresso makers, you’ll probably be quite satisfied with the temperature of your drink.  If you’re not, it too is adjustable, and you can augment it further by making use of the cup warming tray, which we’ll talk about next.

This isn’t as big a deal on the DeLonghi ECAM23460S, because as we mentioned, the temperature of its output tends to be somewhat higher.  Even so, if you’d like an extra kick of heat, then do plan to make regular use of the generously sized cup warming tray, located on top of the device.

Doing this will help ensure that your drink suffers minimal heat loss when it is transferred from the boiler to your cup!

​(Fairly) Easy to Use, and Easy to Clean

​(Fairly) Easy to Use, and Easy to Clean

Much of the DeLonghi ECAM23.460's maintenance is automated, and in fact, some users have complained that "it spends too much time rinsing.”  We’re not sure if there is any such thing as a machine that’s too clean, and are all for as much automation as possible on that front!

Sure, there are some elements of the cleaning you’ll need to do yourself, specifically in terms of occasional descaling, cleaning the frothing wand, emptying the drip and dregs tray, and the like, but none of these are difficult or especially time consuming.

Unfortunately, the decision to use older tech in the form of the LED display doesn’t do the device any favors in terms of usability.  The simple truth is that a TFT (Thin Film Transistor) screen would have made the machine much simpler and much more intuitive to use.

As it stands, there is a bit of a learning curve here, made slightly steeper by the LED display, but even so, it’s nothing that will present too great a challenge, even to a person who’s not especially tech savvy.

As you can see based on our ECAM23460s DeLonghi review to this  point, there’s a lot to like about this model. It has the basics well covered, and even acts as something of a bridge between the drip coffee  maker world, where the drink is brewed by the pot, and the world of  specialty coffee drinks.

Having said that, while users who are relatively new to the world of specialty coffees will love this machine, more seasoned aficionados will probably chafe under the limitations of this model.  In our view, the biggest weaknesses of the 23460S are:

The DeLonghi ECAM23460S is a strong contender, especially if you’re just beginning to explore the world of specialty coffee drinks.

While there are a few things it doesn’t do well, it delivers the essential specialty coffee experience in style, and you’ll be quite pleased with the quality of the drinks it’s capable of producing.

We recommend it, especially as someone’s first super-automatic. 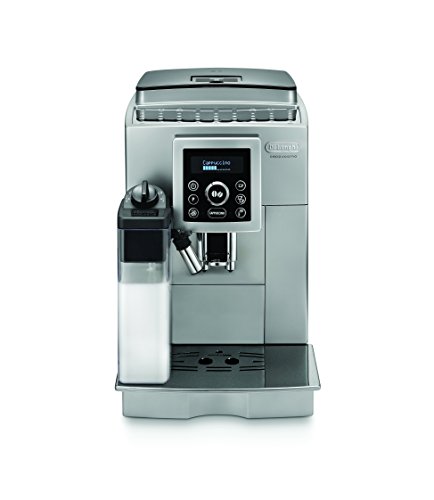